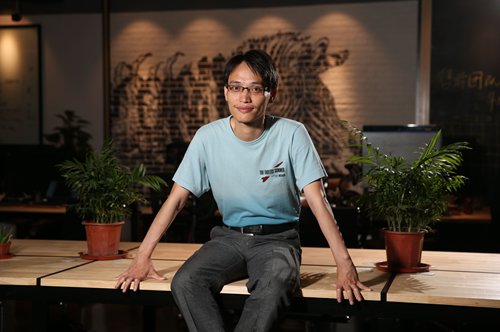 There's no hotter phrase than artificial intelligence (AI) in today's technology world. This is especially so in China, where Google's Go-playing AI AlphaGo trounced top-ranked Chinese Go grandmasters at a Go summit in Wuzhen, East China's Zhejiang Province in May.  Adding fuel to China's AI hype, Beijing-based AI chip start-up Cambricon Technologies set a target of having 1 billion devices globally using its chips while unveiling new AI processors earlier in November.  In an exclusive interview in Beijing with Global Times reporter Li Qiaoyi (GT) last week, Lin Chenxi (Lin), co-founder of Shanghai-based YITU Tech, one of China's major AI start-ups, revealed that the company has invested in a domestic chipmaker to enable increases in AI computing power. The former senior expert at Aliyun Computing, Alibaba's cloud-computing arm, also shared his thoughts on the prospects for the country's AI space. GT: What areas and industries do you think have great potential in terms of the practical applications of AI technologies but have yet to be widely recognized as a fertile field for AI applications? Lin: Even where there already seems to be a lot of hype about AI applications, there's still a long way to go before AI plays a significant role in rejuvenating any given industry. For example, alongside the growing awareness of AI's capabilities in the public safety and security arena, the healthcare sector has over the past year been increasingly considered a race track for businesses making bets on AI.  Nevertheless, there is still much unseen potential for AI's applications in the healthcare sector. That will mean an improvement not only in the efficiency of treating illnesses but also the efficiency of doctors learning about how diseases can be cured, as machines are seen doing a splendid job in gathering human physicians' experience and making themselves into experts based on machine learning.  This will require technology breakthroughs not just in computer vision, but in natural language processing, semantic comprehension and healthcare knowledge mapping. Data accumulated over the course of unleashing the potential in AI's healthcare applications could also influence drugs' development so as to address even more problems.   Down the road, the new retail, education and transport industries, as well as manufacturing and other areas related to people's livelihoods are expected to be remade by AI.

GT: Are China's AI companies overtaking their US counterparts in terms of technological strength and overall competitiveness?

Lin: To be sure, China's AI start-ups at large are barely on the same level as the likes of Google, although some Chinese AI companies might prove to be stronger than Google in certain technologies such as face recognition. Even Chinese technology companies as big as Baidu, Alibaba and Tencent are still not on par with Google as measured by AI vision, talent pools and overall technological strength.

That said, with strong support from the Chinese government, which considers AI to be powering the country's future growth, China has made huge headway in the AI space. It is believed that China and the US will become the twin engines powering the global AI sector in the next decade.

Also worth pointing out is that while China has apparently taken bolder moves in creating innovative AI applications, it is wrong to think China has innovated only in application terms. For instance, there is an actual demand in China for facial recognition technology to be widely used, considering the need to spot criminal suspects among our huge population, among other scenarios. Practical needs will probably result in theoretical breakthroughs, which will help in addressing world-class problems.

Eventually, there can be breakthroughs in algorithms and software architecture. Global prizes, especially in facial recognition technologies that have been won by domestic AI companies including YITU Tech, signal the country's rising prowess in the AI world.

GT: Can you compare the AI start-up environments in China and the US?

Lin: China drew up an AI development plan earlier this year that sees the country as being a world leader in AI by 2030. AI development, as such, has become a national plan, which means massive government funding support, more incentives for cities to attract AI talent and greater media coverage of AI-related initiatives.

This is quite different from a few years ago when China's technology start-ups primarily focused on the mobile Internet, particularly the online-to-offline businesses. At that time, a Tsinghua University graduate would have hesitated to join an AI company, as the concept was hardly known. But it's entirely different now as the government's AI push has served to substantially elevate public recognition of AI-related positions. This makes a lot of sense not just in recruiting AI talent, but in marketing and reaching out to the mass market. In this regard, China has built a better environment than Silicon Valley, with domestic start-ups having more access to Series A round funding, which enables a more vibrant AI start-up environment in China.

GT: How do you evaluate domestic AI start-ups' ability to monetize the technology?

Lin: Unlike many market observers who doubt AI businesses' ability to make money, I believe it's actually not that hard for an AI business to do so, particularly in the business-to-business arena. In such cases, AI applications in specific scenarios make it easier for monetization to be achieved once certain technological breakthroughs reshape an industry.

For example, AI-powered consumer service systems can be created to remake the traditionally human-intensive consumer service businesses. It could be slow at first, but it will grow very quickly at a compound rate. In consumer-to-consumer areas, it will take more time for monetization to be achieved, as genuine "killer apps" applying AI technologies have yet to be seen.

Lin: It's impossible to foresee what AI would achieve in technological terms. Take AlphaGo as an example. At a certain point, machines will level the playing field with humans, but beyond that point, machines will beat humans by a large margin. I wouldn't say technological advancements will one day destroy humans, but it still depends in whose hands the technologies are. It's actually the same with nuclear weapons. There need to be rules that AI can't be used to do evil things.

In the case of YITU, in addition to AI chip investment, it will be of growing importance for the company to explore overseas markets. The company has just signed a strategic agreement with the Singapore government about providing AI-powered safety and security solutions. Looking forward, European countries, African countries and markets along the route of the Belt and Road initiative will be key areas to be tapped.

You can copy the link to share to others: https://www.yitutech.com/node/451